How’s the old expression go: “Cut off your nose to spite your face?” Although this morning’s news indicates I may’ve achieved that very result, I can’t say I regret my juvenile behavior. No, I believe the perverse sense of satisfaction I’ve drawn outweighs my figurative scarring.

This is about doctors; specifically, their appointment cancellation policies. You know what I mean: the charges some of them unilaterally impose when patients fail to appear for appointments on less than 24 or 48 hours’ notice. Having twice paid those obnoxious fees, I can confirm that the medics show no regard for legitimate excuses either. Even when a certain lawyer-patient didn’t show up because a judge’s calendar ran three hours late, and said lawyer couldn’t notify the doctor’s office because the courthouse didn’t allow cellphones, the response he received upon calling to apologize remained: “No problem, but we’ll have to charge you for the missed appointment, per office policy.”

What irks me most is, the physicians assessing such charges are also the ones who routinely keep patients waiting an hour or more beyond their scheduled examination times, without offering the least apology or explanation for the delays! Some of these medics have even canceled appointments at the last minute due – so their receptionists claimed – to “unforeseen” medical emergencies. On those occasions, the healers certainly didn’t offer compensation for their patients’ valuable wasted time!

Admittedly, I like my G.P. He’s an excellent practitioner, with a fine bedside manner to boot! Nonetheless, he’s proved guilty of all the practices I detest. And he’s never exhibited the least remorse for imposing his “office policy.”

A few months ago, he hired me to sue the contractor who’d remodeled his home. After the defendant served discovery requests, I scheduled a meeting with the doc to prepare our responses. Fifteen minutes after the appointed hour, he phoned to say he’d been held up at the hospital doing rounds, and he’d have to reschedule for another day. So we did.

My physician-client called me again this morning … to complain about my March invoice for services rendered: “Richard, what’s this hundred and fifty dollar charge for ‘missed appointment’? You know I couldn’t make our meeting because my patient went into cardiac arrest!”

You can guess my answer. Emulating the same detached tone I’d heard from his receptionist, twice, I replied: “Sure. But it’s my company policy to charge for meetings canceled on less than 24 hours’ notice.”

Like I should’ve realized, a physician who bills his patients for missed appointments and doesn’t apologize for his own untimeliness doesn’t appreciate the irony of turnabout. The highly insulted M.D. informed me he’ll be taking his legal business elsewhere. He also said I should find myself another primary care physician.

As matters stand, I’m going to lose a bit of income, and I’ll have to search for a new doctor as well. That’s okay. As I see it, there’s no price too high for justice! 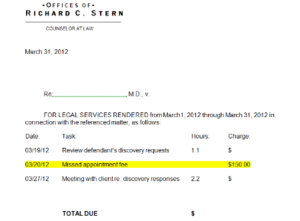