↓
Home Menu ↓
Skip to primary content
Skip to secondary content
Home→Kids→#47 – There’s No Such Thing as a Unicorn! — Part 1

[This tale is presented in two parts, today and tomorrow, so as not to overburden the reader]

In order to understand the unicorn debacle, you first have to understand Gina.  My sister-in-law thinks
of herself as firmly grounded in reality. As I see it, her monthly credit card debt (at times greater than her
husband’s take home pay) proves the last thing she’s actually grounded in is reality.  Nonetheless, in this instance it’s the thought that counts.

While she’s made limited exceptions for Santa Clause and the Tooth Fairy, Gina draws the line at children believing in mythical beasts.  I consider her posture on those subjects a tad fanatical, and also impossible to understand.  But like any good zealot, she seems unwilling or unable to justify her position.

In any event, her strident campaign against all things mythological helps explain the increasing severity of her reactions several days ago, when her son Franco — who’s just turned five — surprised her with the announcement: “Mommy, I got a unicorn!”

The fact that Franco made his stunning proclamation in his parents’ bedroom without having knocked, after he and his sister had supposedly gone to sleep, didn’t exactly calm his mother either.  She sternly informed him that “there’s no such thing as a unicorn, so get back to bed right now!” … after lifting her head from the vicinity of her husband’s nether region.  Considering the celerity with which the lad exited his parents’ boudoir, I doubt he heard his father’s added comment, to “listen to your mother!” … spoken while peeking up from Gina’s derriere.

Alas for Gina, her son’s nighttime unicorn proclamation did not constitute a solitary blip on his imaginary radar screen.  Throughout the following day, she faced a litany of similar outbursts from the lad, as he interrupted various chores and activities with cries of: “Mommy, I got a unicorn;” and “Mommy, look at my unicorn.”

Gina did her best to remain calm in response to her child’s running commentary.  She heroically buttoned
her lip while dragging Franco through the aisles of the supermarket, to the counter at the dry cleaner, and to the prescription pick-up at the pharmacy.  Each time her son raised the unicorn specter, she coolly responded: “Franco, there’s no such thing as a unicorn.”

But every person has a breaking point, and early that afternoon Gina reached hers.  Franco made one more request to “look at my unicorn” than his mother could bear.  Unable to stop herself, she shouted: “God dammit, Franco!  For the last fucking time, there’s no such thing as a unicorn!!!”

It was a close call as to which bystanders seemed most shocked by Gina’s eruption.  The main contenders consisted of: a)  Franco, who broke into tears at the surprising vehemence of his mother’s retort; b) the reference librarian, who didn’t normally have to contend with shouting at the public library; and c) the other, largely-Christian parents and kids who also happened to be attending the children’s reading hour. 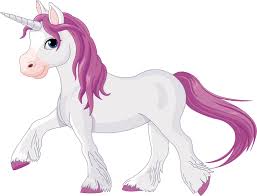 There’s no such thing as a unicorn.