Last night I got a call from my best friend, Ned Stilzman.  We’ve been tight ever since high school, when he introduced me to hockey and the Rangers.  Unfortunately, we don’t get to see each other much anymore — with him living in Maine and me down south.  It’s always great catching up with him though, especially when he tells me a tale of blunder worthy of my most ridiculous episodes.

Ned said he and his wife Susie took their two kids on a whale watching cruise over the weekend. Before embarking, Susie dosed herself and their five-year-old daughter Jackie with Dramamine, to protect against sea sickness.  She suggested that Ned do likewise.  He declined, smugly assuring the Mrs. of his trusty sea legs (earned and confirmed while canoeing on Lake Placid one summer).

Unfortunately, the choppy waters off the coast of Maine that day challenged Ned’s “iron constitution” in a fashion the glass smooth lake had not.  Within twenty minutes of casting off, before the first fin was spotted, Ned began to experience a growing discomfort in the general vicinity of his midsection.  What began as a mild case of queasiness soon accelerated into wholesale nausea, followed by a telltale vomit burp.

Unwilling to give his wife the satisfaction of an “I told you so,” Ned swallowed the bits of regurgitated food lining his mouth.  He gritted his teeth and prayed for a suitable opportunity to lose his lunch outside his wife’s notice.  Lo and behold, his prayers seemingly were answered.  Susie announced she had to accompany their daughter to the bathroom, and left both their twelve-month-old son Justin and her pocketbook in Ned’s care.

Valiantly, Ned adopted a nonchalant air as the pair prepared to depart (as nonchalant as possible for a guy with an esophagus doing the “Wave”).  He hoped to dash to the boat’s railing, puke and get back to his seat before Susie and Jackie returned.

As you might expect, Ned’s tale did not conclude with “just in the nick of time.”  Jackie thought she saw a whale to port and tarried at Ned’s side for almost a minute awaiting verification, while Susie shared a look of affectionate exasperation with her husband.  By the time they finally moved off, Ned’s stomach emphatically informed him he had no chance to reach the boat’s railing. He realized he wouldn’t even make it out of his seat.  Thinking quickly, he upchucked into the only receptacle in his immediate vicinity.

His wife and daughter returned shortly after.  Not surprisingly, Susie didn’t appreciate the sight of her Gucci pocketbook overflowing with vomit.  Nor did she take kindly when her husband attempted to foist the blame on their infant son.  Despite a performance worthy of a congressman, Ned’s matter of fact assertion – “I guess he’s not the seaman his dad is” – did not go unquestioned.  Susie took one look at the contents of her purse, fixed Ned with a smoldering glare, and sarcastically replied: “Maybe so, but Justin should’ve known better than to wash down his burrito with a pint of beer before taking a cruise.” 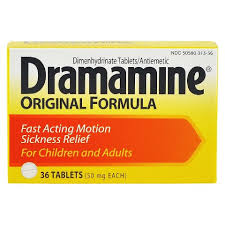 To prevent seasickness, including on whale-watching tours