I used to keep secrets like a champ, but not anymore.  It’s not that I intentionally spill the beans.  Rather, my ever-shrinking brain lately has trouble remembering which juicy tidbit constitutes a closely guarded confidence and which represents fodder for the general gossip mill.  Take this afternoon for instance.

Some time ago, Sophia had shared a real eye-opener with me concerning our next door neighbors, whom I’ll refer to as “Lucrecia” and her husband “Hernando.”   It seems Lucrecia told Sophia in strictest confidence how she’d caught Hernando traipsing around their house wearing her lingerie and nothing else (not an isolated incident either).  When Sophia passed on the information to yours truly, she swore me to secrecy.

Weeks later, Sophia shared further gossip garnered from one of her neighborhood friends; only this time, the story pertained to another couple and it wasn’t a secret.  It seems one of the neighborhood women had caught her husband in bed with their housekeeper, having his “furniture polished” so to speak.

Both tales sounded similar to me, with women catching their husbands in the midst of unsavory activities. That’s the best and lone excuse I have for mixing up the stories when I spoke to Lucrecia and Hernando this afternoon.  While retrieving the mail, I’d spotted the couple doing yard work and stopped to chat.  Lucrecia opened the gossip lines first, asking me whether I’d heard about the alcoholic shenanigans of a certain individual on our street. I hadn’t. But as I replied, I did know a much tastier bit of gossip concerning our mutual neighbors.

You can guess what happened next.  Confusing the two stories I’d heard from Sophia as well as their original sources, I made sure to say nothing about Hernando’s illicit affair with the housekeeper (although, having seen the middle-aged matron who cleaned their home, both Little Richard and I deemed Hernando’s behavior doubly disgusting).  Instead, I sought to amuse them with the general gossip I’d heard about the guy who likes dressing in his wife’s underwear.

The mirror images of stunned embarrassment which greeted my recitation finally sorted out my memory snafu. Though the proverbial cat was already out of the bag, I didn’t exactly help matters by staring intently at Hernando and imagining him in a Teddy.

No one has to tell me a simple “oops” won’t fix this situation.  Once Sophia hears from Lucrecia, it’ll be the doghouse for me.  Oh look, my cell phone’s ringing … and it’s Sophia.  That didn’t take long. 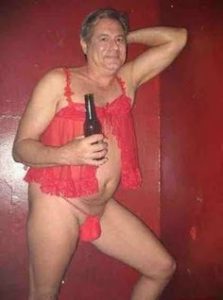