ddavp nasal spray Boy am I pissed! Oedipus has gone missing and all signs point to Sophia as the guilty party. Oedipus is my pet iguana, named after the ancient Greek king who married his mother and killed his father.  Not that I condone such behavior. No, I just thought it fitting to put all the money my parents spent on a degree in Greek history to some use.

https://medisur.fr/52121-site-de-rencontre-bresilien-82583/ Sophia’s had it in for Oedipus since the day I brought him home last year.  As I recall, her first words on seeing him were: “The only way that lizard stays in this house is in the form of a wallet!” Nonetheless, she vehemently denies any involvement in his disappearance.  But she’s the one with motive and opportunity, especially after last week’s lip-lock fiasco.

site de rencontre catholique gratuit Saltillo Sure, she claims she was simply making friends with him, yet she clearly didn’t know when to quit. Oedipus behaved the perfect gentleman when Sophia rubbed his flank.  And when she chucked his chin, he even nuzzled her fingers.  She should’ve stopped there.  I know I would’ve.  Instead she took liberties, ones which – I might add – understandably went unappreciated. She kissed the iguana on his mouth; in my opinion an assault no different from a man shaking hands with a woman he barely knows and then grabbing her breast!  The obviously-affronted Oedipus reacted somewhat like the woman would in such a situation; he bit Sophia’s lip … and then dangled from it like a bizarre tribal ornament.

https://amapdesperceneige.fr/6215-site-de-rencontre-russe-gratuit-67112/ The timing of Oedipus vanishing from sight the very next day did not escape my notice.  And in hindsight, I’m also starting to wonder about that evening’s supper entrée.  Sophia had never cooked “barbecued pulled chicken” before, and I suspect she’ll never cook it again. 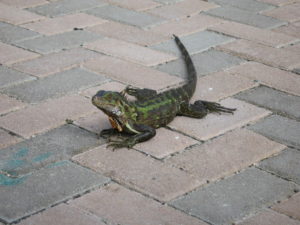