I got a puppy for father’s day this year, or so it would seem.   No doubt guilt-ridden over her role in Oedipus’ disappearance, Sophia presented me with a tiny squirming ball of fur this morning.  She told me: “I know you’ve wanted a dog for a long time and we don’t have kids of our own, so Happy Father’s Day!”

It’s safe to say my response wasn’t precisely the one she expected: “A dog? That’s great! Is this undersized rat the bait to catch it?”

Sophia sounded less than amused in her reply:  “Hah Hah; very funny.  This is a perfectly fine dog, and you’re gonna love him!”

To say the least I remained skeptical.  I’d grown up with a huge German Shepherd.  That’s what I considered  a man’s dog; not this miniature pom-pom, whatever it was.  Which prompted my next question: “Exactly what canine breed does this … thing supposedly represent?”

I could hear the exasperation in Sophia’s voice when she answered:  “Jeez Richard; if you must know, he’s part Shih Tzu and part Yorkie. Satisfied?”

“You got me a Shitty?” Now I was the exasperated one.

“I believe the correct term is ‘Shorkie’ or ‘Shorkie Tzu,’ Richard.  Alright, quit your whining and enjoy your new pet.”

With that she handed me the so-called puppy and walked away, but not before tossing off a parting shot: “Oh honey, don’t even think of calling him ‘Oedipus’ like your iguana. And for the hundredth time, I did not murder and sauté him for dinner. Anyway, I will not embarrass myself again having to explain to friends and family why our pet’s named after an incestuous parent killer! Remember, he’s a little dog, so I don’t want to hear any other equally ridiculous three syllable name either!”

“Fine!” I yelled toward the back of my wife’s retreating head.  “But he’s my … dog, and I’ll call him whatever I want.”

Well I showed her.  As directed I didn’t name the critter “Oedipus,” or anything else with three syllables.  Instead I’ve christened him “Prometheus;” you know, after the Titan of Greek Mythology, the one chained to a rock whose liver gets eaten every morning by an eagle only to have it grow back by the end of the day. A distinguished appellation if ever I heard one.  And four syllables no less! 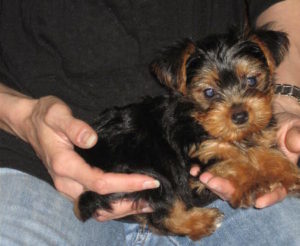